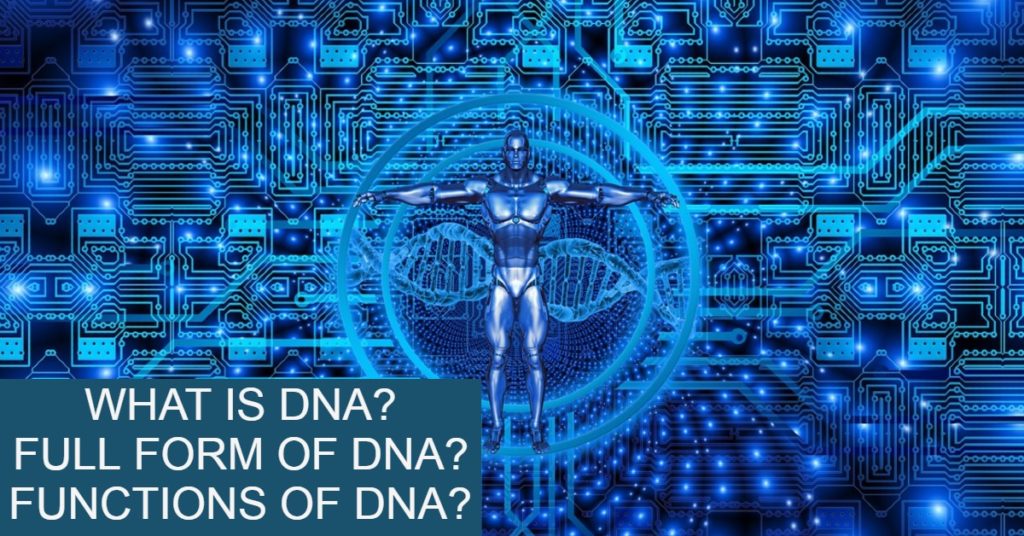 In this article, we are going to learn about what is DNA definition, and the full form of DNA ka and Some repetitive functions, where it is found, what it actually is and what it is made of! All living things have DNA or in the case of some viruses, they have RNA instead. The full form of DNA stands for deoxyribonucleic acid.

Let’s start with where it is found. Most cells are eukaryotic -animal cells, plant cells, fungi, etc. Inside eukaryotic cells, you have a nucleus. Within most nuclei, there are X-shaped chromosomes. Chromosomes occur in pairs, but the number of chromosomes changes depending upon the species.

Humans have 23 pairs, elephants have 28 pairs and carrots have 9 pairs.DNA is found within these chromosomes. Archaea and bacteria are prokaryotes and because they don’t have nuclei in their DNA, it is located in their cytoplasm.

It is a large complex molecule that carries genetic information that determines the characteristics of living things. And other than identical twins, we all have our own unique DNA.

DNA contains lots and lots of sequences. Some sections of these sequences have a specific genetic code for making particular proteins and these special sections are called genes.

A gene is just a short section of DNA, deoxyribonucleic acid and because each gene code is for a specific protein, it is in these genes that give us our individual characteristics, such as whether you have blue eyes or brown eyes.

Proteins are the building blocks of life and as our genes code for specific proteins, this is how DNA controls our body and helps us to survive, develop and reproduce.

What is DNA made up of?

deoxyribonucleic acid (DNA) is made up of lots of molecules called nucleotides.DNA is a polymer because it is a large molecule composed of repeated subunits, the nucleotides. Each nucleotide contains a phosphate group, a sugar group, and a nitrogen base. When people think of DNA, they usually think of these bases.

There are four bases –Adenosine, Thymine, Cytosine, and Guanine. But just remember – A, T, C and G. And it is best to remember in this order, A-T, C-G, because A and T bases pair up, and C and G bases pair up. The bases pair up forming hydrogen bonds and the DNA forms a twisted shape, known as a double helix. So there you have DNA. You should know that it is usually found in the chromosomes, within the nuclei, of cells.

It is a polymer and it is made up of lots of nucleotides that contain bases. There are four bases – A, T, C and G, and the bases pair up as A-T and C-G.

What do we know about repeated DNA behavior or function?

So we have identified satellite DNAs. We say they’re highly repetitive. Now we know about ribosomal RNAs; they hybridize to the moderately repetitive region.

What has repeated DNA behavior or its function?

Microsatellite sequences are very highly repeated and they are associated with centromeres. They’re also a major part of heterochromatin. In centromeres, they help to form the kinetochore during mitosis and meiosis.

So microsatellite DNA has a function, apparently to anchor microtubules on the spindle fiber to help pull the chromatids apart during either mitosis or meiosis.

There are many satellite sequences. These are sequences that are a bit longer than microsatellites but also highly repeated. They are spread out in the genome, so they don’t focus on one part of the genome. They don’t code for anything and in fact, most are of unknown function. One exception may be sequenced in the telomeres and we already know that telomeres serve to maintain chromosome length during mitosis.

Why deoxyribonucleic acid transposes are repeated?

They repeat because they can copy themselves and jump into many, often random sites in the genome. And it turns out that transposes are part of the middle repetitive or middle CoT value DNA. So here’s a table that summarizes the types and some characteristics of repetitive DNAs.

Now, this is very small; I don’t expect you to look at this and stare at it in a classroom, but please look at it and you can compare transposable elements, ribosomal RNA genes, transcribed genes, the intones of genes, the DNA between genes. And satellite DNA. Those are the major types shown here. And the table shows you which of these categories of DNA are highly repetitive, moderately repetitive or more or less unique. It gives you some examples and tells you some functions where we know.

I hope you will know now the full form of DNA